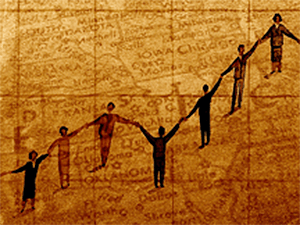 I often receive bemused looks when my SEED friends hear about my quantitative research and vice versa. Numbers are numbers and SEED is SEED, right? Here is a 2014 version of what the link looks like in a ridiculous sleight of hand.

This bar graph from the Economist seems to show that the Asia-Pacific region of the world has largest share of slave economy in the world. Oh. Wait. That's because the Economist split "Developed economies and the EU" and "Central and South-Eastern Europe." Nice try, Economist. Not. Slavery remains a $60 billion industry in primarily White countries.

According to social justice educator Victor Lewis, "You know, I walk in a world where Black people, where Latinos, where Asians, where Arabs ... all these different people are experienced as ‘problem people’ and that, ‘Well, we're going to deal with the Person of Color's problem,’ when, in fact, racism is essentially a White problem. And that, for you to understand, what racism is about, you're going to be so uncomfortable. You're going to be so different from who you see yourself to be now that, you know -- there's just no way for you to get it from where you're sitting." While, statistically speaking, I don’t believe that modern slavery is 100% a White problem, it remains disproportionately cast as Asian brothels, Latin American drug mules, and African child soldiers. Statistics (when correctly presented) can tell a different and fuller story.

SEED challenges us to think critically both personally about our own stories and the stories we’ve heard and then to frame these stories as part of wider systemic dynamics. What are our own experiences with modern day slavery? What have we been told? How do the stories we tell and the stories we’ve been told shape how we see and interact with others? When the only stories I know about slavery are about People of Color in slavery, then I see slavery as a People of Color problem. When I see statistics telling the more complete story of global slavery, my paradigm shifts. I see slavery differently. I see People of Color differently. I see Europeans and White people differently.

This August, I was driving up the Pacific coast when the protests in Ferguson broke out. National media attention focused on the “problem” of racial tensions in St. Louis. Where I was, however, I saw town after town of predominantly if not exclusively White residents with scores of homeless individuals, many of whom were clearly under the influence of drugs and alcohol. Where was the news coverage of this problem? Of this unseen, underreported bias? As we move forward in creating the change that we want to be and see, let’s remember to ask ourselves the hard questions. What am I seeing? What am I not seeing? How can we become more open to the many stories that aren’t reported or that are misreported? When we make room for all the stories, that’s when we’ll begin to see the change.