The Leadership in Me: The Untold Girl Piece 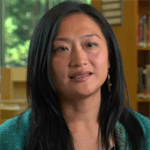 In honor of Women's History Month, here is an essay by SEED leader Yun-Chi M. Hsu about how, as a girl, she found her leadership abilities in the face of gender-based bullying.

Leadership is an elusive quality that allows us to influence the minds and direct the focus of others while enhancing their own agency. It is, to me, not a "what" but a "how." As the youngest of four siblings by nearly a decade, I grew up accustomed to being told what to do and accepted my role as "little sister" at home. My first conscious experience as a "big sister," outside of my home environment came at the moment when I realized that my outspoken character, coupled with moral purpose, allowed me to effect change in the world around me.

Partly out of school tradition, and partly because the idea that "boys will be boys" was nearly ubiquitous during that era, several of my male classmates were in the habit of "borrowing" girls' belongings — especially bikes — for extended periods of time and without permission.

It was the spring of 1991. At Zhong Zheng Middle School that meant one thing: Boys Gone Wild! Partly out of school tradition, and partly because the idea that "boys will be boys" was nearly ubiquitous during that era, several of my male classmates were in the habit of "borrowing" girls' belongings — especially bikes — for extended periods of time and without permission. The ringleader of this group of quasi-bullies was Yan-Liang. Handsome, popular, well-to-do, and absolutely bad news, Yan-Liang would walk the streets near school alternately flirting with and menacing the neighborhood girls. The changing of the seasons — sweet flowers in bloom amid lingering firecracker smoke — brought out the worst in him, leading to the incident that brought my leadership potential to the surface.

One day after school, Mei-Chun, my best friend since birth, arrived at my door sobbing. "Yan-Liang stole my bike," she cried, stomping her feet and cursing boys in general. "He said he only wanted to take it for a ride, so I let him. But he didn't bring it back."

"Of course he didn't, dummy," I replied, smug and apparently indifferent. Inside, however, I felt for the first time what could be called righteous indignation. "Who are these boys to take our stuff? Just because they always get away with it doesn't mean that we have to put up with it." Honestly, had it happened to anyone but my best friend, I probably wouldn't have cared. My sense of moral obligation to family and friends, however, would not let me accept my best friend being bullied; it was as if I was being bullied myself! At that moment, consciously or unconsciously, I decided to take on a leadership role.

The next day at school, Mei-Chun and I cornered Yan-Liang and demanded that he return the bicycle. Outnumbered but clearly not intimidated, he laughed at our demands. "Go play with your dolls! Why do girls have bikes, anyway? All you want to do is play house," he said, shooing us away. Furious, but undeterred, my next strategy was to try a strength-in-numbers approach. At the lunch table later that morning, I told the other four girls in our clique what happened and asked them to meet at my house after school. The plan was to wait for Yan-Liang to pass by and confront him. "Sure thing," they said. Later that day Mei-Chun and I sat on my front steps waiting for a cavalry that never appeared. Disappointed by my friends' cowardice, I decided that I would try a better approach the next day and stayed up past my bedtime brainstorming on ways to get Mei-Chun's bike back and teach Yan-Liang a lesson in the process.

The following morning I started my campaign. "Meet me at my house after school. We're going to do something really cool," I whispered to each of my female classmates. "And don't tell the boys!" I didn't tell them why I wanted them to stop by (I'd learned that lesson the previous day), but used my relatively high status within my peer group as a motivator. After school that day Mei-Chun and I spent what felt like an eternity waiting for more girls to show up. To my surprise, they did! Our group grew to four, then seven, then ten, then twelve. Still, the assembled group did not know what I had in store for them. Summoning all my courage, I began: "Hey, guys, I have a question: is Yan-Liang really your friend? Everybody thinks he's so cool because his parents are rich, but he's mean. He takes advantage of girls! He took Mei-Chun's bike and won't give it back because he says girls only like dolls!"

The girls were quiet at first, but then Yi-Chen spoke up. "He did the same thing to me, plus he broke my pencil in class last week."

"Yeah!" said another girl. "I was playing in front of my house and he said he wanted to borrow my jump rope, but he never brought it back." Realizing that it wasn't going to be difficult to get the girls on my side, I moved on to the next phase of what I had begun to think of as my "Master Plan." "Let's go to his house and get our stuff back," I yelled, oblivious to the reality that Yan-Liang hadn't taken anything from me personally.

We went to Yan-Liang's house with the intention of confronting him, but he ran inside as soon as he saw us coming up the street. "Come out, coward," we shouted, but to no avail. I felt defeated, but refused to accept that he could just walk into his house and negate all my hard work and planning. Then I had an epiphany: "Miss Liu! Miss Liu!" I called out to his mother. Soon the others joined "Miss Liu! Miss Liu! Come out. Yan-Liang's bullying us." At that last mention the door swung open. Mrs. Liu….

We told her what kind of person her son was, but she didn't punish him. Instead, she confronted him in front of all of us and made him describe, in detail, every "borrowing" incident that had ever occurred. Still, he had to return the things he stole. To my great surprise, the tears that trickled down the corner of his eyes somehow made me feel conflicted inside. I had helped all the girls achieve the ultimate goal — getting our stuff back, but at the same time, I felt bad to see Yan-Liang sob in front of perhaps the toughest crowd he had ever encountered at that point of his life. My realization (years later) was that leadership doesn't equal making everyone happy; instead, it emphasizes the process, or the how, of making positive changes in the lives of those around you. In my case, it was organizing allies and exposing injustice. Yan-Liang wept but he also learned a great lesson that day, or so I'd like to believe.

Nowadays, I no longer summon my female peers on bicycles to make positive changes in life. However, the enthusiasm, energy and hopefulness I had from seventh grade continue to live in my heart.