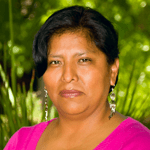 I was born and raised in La Paz, Bolivia. Early on, I learned that girls from impoverished neighborhoods such as mine were not expected to accomplish much. The evidence was all around me. However, I felt empowered when my mother talked about education being the “key” to success. Her words instilled in me a desire to defy the odds. In my heart I knew that I would go to college someday, somehow. During my junior year of high school, my mother passed away in a tragic accident. Sorrow, hopelessness, and immense pain led to the realization that life would never be the same, and to my departure for the USA.

On the surface, coming to the USA at age 18 was a decision based solely on economic hardships, but to me it was rooted on my mother’s legacy of searching for the “key” to success. Still coping with culture shock and homesickness, I enrolled in an English as a Second Language (ESL) program at a community college. Going to school gave me hope, peace, purpose.

A dream come true, I completed my B.A in Human Development with a minor in Early Childhood Education at Lesley University in 2005. In 2008, I earned my M.Ed. degree there. I had begun my teaching career in the fall of 2005 at The Meadowbrook School of Weston, which had been my daughters’ school since 1996. As Latino children in a predominantly white independent school, they experienced some of the difficulties associated with being the “only one.” I became actively involved with addressing these issues through serving on the school’s Diversity Committee and various school-wide initiatives, such as Meadowbrook Students Of Color (MSOC) affinity groups, All Working At Racial Equity (AWARE) curriculum, and, later, SEED seminars.

Attending the SEED New Leaders’ Week in 2010 gave me the unique opportunity to co-facilitate Meadowbrook’s first Faculty and Staff SEED group. In 2011, a second group was formed to engage the parent/guardian body. The participants’ testimonies have been uplifting, encouraging, and overwhelmingly positive. Thus, I can attest that at Meadowbrook, SEED has opened doors for meaningful and respectful conversations around tough issues such as race, ethnicity, gender, etc., and has given our community, parents, and teachers alike, a new perspective. I was honored to join the National SEED Project staff in 2012, as I have experienced firsthand the tremendous impact it has on the lives of those who attend the training as well as those who are later touched through its work.